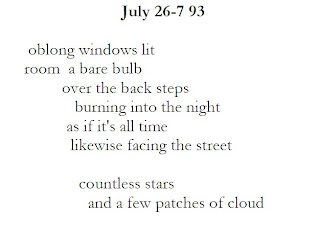 I've been reading the poetry of Larry Eigner this last week or two. John BR kindly sent me two of his books: a Selected Poems, and "readiness/enough/depends/on" his last collection published shortly before his death. John has just bought Eigner's monumental Collected Poems, which reproduces his original typescripts, which is why he could send me books. I don't know why I haven't paid Eigner much attention in the past; I've been missing out in a big way. I started reading these poems aware of Eigner's disability, but I soon forgot that, as the poems are universal. Eigner reminds me of Joanne Kyger; the latter's Buddhist acts of attention being mirrored in Eigner's diary-entry observations of exactly what he sees. But more than that, both poetries give us poems of thought, that is, the poems that re-enact a thought process, mirroring the way the process evolves and simulating the spontaneous associations of thought. I have found some these poems profoundly moving. But they're also intellectually exciting. Eigner has been a huge influence on the LANGUAGE poets, I guess due to his foregrounding of the text, and isolation of words as units partly due to their placement on the page. He also pursues the no-ideas-but-in-things" notion to the nth degree.

I suppose Eigner's disability provided a constraining mechanism in the same way that a strict poetic form does; the sparseness of his text necessitated by the slow and painstaking way in which they were put onto paper. It’s interesting that in one sense Eigner’s work is very-modern(ist), in another his poems are tied to their mode of production, in which the typed and scrawled page is as much part of the work as the scroll in a classical Chinese picture-poem.

this film should "thicken the stew"