On this day, twenty years ago 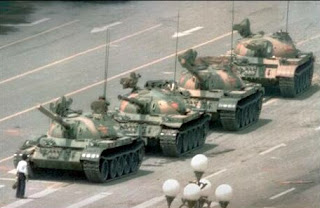 
on CNN or some station yesterday they interviewed now a grown up woman leader of these protests then.


the guy in front of the tank... he is now in a wheel chair with no legs.

ANYWHERE around the world especially in China..I guess it s all about the money and the oil, stupid! and fact-less, disingenuous, naive pandering

best we can now politically-safe to say "woman need education"