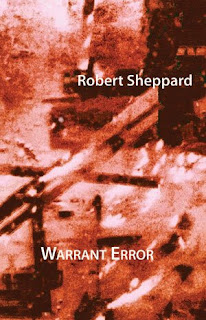 Immensities blade rushes the wind and
grieves a full deck of bad luck.

A managed democracy dances in tune
to a spread-cleft litany, as the Queen's English
warbler, toned to death, unstrews his truth

The blind justice hangs his slogan. Stop.
Burgeon a burden for the chat laureate
entuning and consuming his own genius. The comedy
terrorist brags his mince as roast beef

No peace fries up on a multiple mind grill,
dithering states in desperate times; the sandy
trap-door promise of paradise rusted by frost.
The biggest part of self weakens its softest
option: its cast out old alibi song

This poem shows a mastery and a thorough understanding of the sonnet form; a tension between compression and expansive discursion, sudden switches of meaning, and a lyricism resulting from close-knit sound and expression. It reminds me of Geoffrey Hill in its tightness and allusiveness (a comparison Sheppard would probably be uncomfortable with); but the crucial difference is that, with Sheppard, there's no patriarchal persona running the show; instead, the borrowings and appropriated texts speak for themselves.

I'd only quibble with one line in that review, Alan - I'm sure RS does have a good understanding of the sonnet form, but this poem shows no such thing. Iambic pentameter it ain't.

Hi Aidan: Does a sonnet have to be iambic pentameter? I've just looked up a couple, one by Thomas Wyatt which begins:

'There was never file half so well filed'

and one by GM Hopkins with the line:

'It gathers to a greatness, like the ooze of oil'

neither of which are iambic, the latter more Anglo-Saxon alliterative. And I suppose English sonnets are an approximation of the original Italian form. 'Mastery of the form' might mean that you succeed in capturing the spirit of the sonnet. I haven't seen the Reality Street book of sonnets (keep meaning to buy it) but I imagine there are all sorts of wild variations on the form, which still require some mastery of that form to create.

"Traditionally, English poets employ iambic pentameter when writing sonnets. In the Romance languages, the hendecasyllable and Alexandrine are the most widely used metres." - Wiki

Well, I've learned something there. I was being a touch tongue-in-cheek with my first quibble, but I admit I did think iambic pentameter was part of the definition of a sonnet. Seems not. It does seem, though, that some formal rhyme scheme or other is expected...
I don't have the Reality Street book, either, but I believe it quite explicitly consists largely of variations upon a standard form.

'Variations on a form' - yes, it's interesting to see how far you can stretch a form and still claim that poems have that form. Tom Raworth's 'Eternal Sections' ar often called sonnets, though it's only the 14-line bit that meet the formal requirements. But the fact that you have lots of 14-liners means that the sonnet-sequence is always an influencing factor in how you read those poems.

As for John Bloomberg-Rissman's sonnets, now they're what call variations...