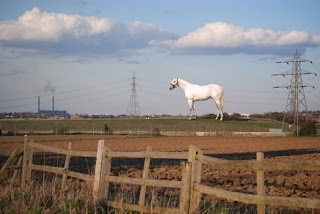 Mark Wallinger won the 2007 Turner prize for his reconstructon of peace campaigner Brian Haw's protest outside the Houses of Parliament against Britain's war in Iraq. Wallinger picked up the lucrative and prestigious gong courtesy of Brian Haw's heroism, without actually subjecting himself to any of the difficulties Haw faced during his long, arduous and dangerous vigil. I thought of this after reading that Wallinger has won a commission to put a lifelike sculpture of a horse in the Kent coutryside. The only imaginative element of this creation will be that it will be "so huge that a person standing next to it will be no taller than one of the horse's hooves" (The Guardian). Someone should have told Wallinger the real meaning of the phrase "big ideas". As it is, the sculpture looks set to become an eyesore for years to come. There's a similarly monstrous creation in St. Pancras station: under the magnificent (and beautifully restored) Victorian ironwork there's a gigantic bronze of a man and woman. It doesn't take a Jonathan Swift to point out that the more the human figure is magnified, the more grotesque its features become. From whence did these artists get the notion that enlarging things to immense proportions makes them intelligent or interesting? Or is it just that they needed projects that justified a huge grant, but didn't risk challenging authority or any preconceived ideas?
Posted by Alan Baker at 5:11 AM

There's a big blue horse right outside the denver airport, a huge blue horse ... here's an article about it and a view of its scrotum.

I was very unsure when I read about this and still am. However yesterday I went to see The Russian Linesman, the exhibition at the Hayward Gallery curated by Mark Wallinger and begin to see what he's doing. He has played with scale before, with Ecce Homo on the fourth plinth. It was remarkable to have a life-size statue amidst the huge monuments and grandiose scale of Trafalgar Square.

I strongly recommend The Russian Linesman which played with my sense of reality and addresses the question of borders. The Annette Messager exhibition which is on at the same time (the same ticket buys admission to both) is also disturbing and terrific although, once again, it looks obvious and easy at first.

I agree that the sculpture in St Pancras is an eyesore.

Kath
I agree that Ecce Homo was effective for its human scale. In that case, as you say, it worked because it contrasted with the grandiosity of Trafalgar square. Outside that context, it would have been an unremarkable piece. I haven't seen The Russian Linesman, tho from googling it, it does look interesting.

It's interesting that the Telegraph and the Daily Mail both approved of the white horse - in the latter case the journo was Roy Strong, in the Mail's words "the scourge of so much modern art..."

Where do they get the "big" idea? Mussolini, perhaps, or Albert Speer... ?

Wasn't the human scale the main point of Ecce Homo? A sculpture for the fourth plinth can never be divorced from its setting. (That's another reason why I favoured Tracy Emin's meerkats.) I wonder if Roy Strong et al will be quite so enthusiastic about the giant white horse when they find out how very small they are beside it - it may remind them of their insignificance in nature. In response to AidanSemmens, The Russian Linesman includes a stereoscopic view of the studio of Hitler's favourite sculpture (I don't recall the name) and the double exaggeration - of size and stereoscopic (exaggerated) 3-D suggests that Wallinger is aware of the dangers of gigantic monumentalism. In some respects I can see a better argument for a giant horse than for the much-loved Angel of the North.

The more I reflect on The Russian Linesman, the more I feel compelled to take Wallinger's projects seriously.

By whom is the Angel of the North beloved? Certainly not by me. I'd be interested to know how many crashes, or near-misses, have been caused on that already treacherous stretch of the A1 by drivers reacting to its sudden enormous appearance as you drive up to it from the south. But there is at least an artistic argument behind it - I can see none whatever in plonking a giant farmyard model on Kent, however good or bad its deviser may have proved himself as the curator of a wacky museum exhibition.

AidanSemmens, I didn't mean to suggest that you liked Angel of the North. However it seems to have achieved a great deal of popular affection, which I respect. I haven't seen any comparable fondness for appalling figures kissing at St Pancras, however.

Kath
Thanks for your contribution to this debate - you've helped me to understand what Wallinger is trying to do. I too can see an argument for a giant horse in Kent, but I'm still not sure about this particular horse. It's the realism - the lack of an imaginative element - that's the problem for me. The horse at Denver airport mentioned by John BR in the first comment is different. I like it; it looks like a strange and mysterious beast, not realistic at all.

Adian
Actually, I like Gormley's work, though the Angel is not my favourite - saw an exhibition at the Baltic in Newcastle that was human forms made out of networks of silver rods. Very ethereal. And I like the men on the beach at Crosby.

I'm afraid the Angel is the only Gormley I know... as for my name, Alan, I have no problem with typos, it's the (many) people who think they know better than me how it should be that piss me off a little ;-)