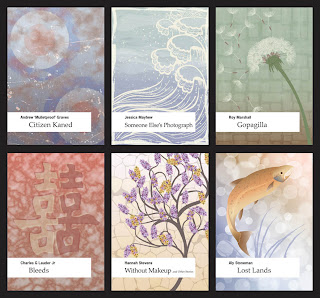 I have a (as yet untested) notion that the quality of most published poetry is higher than it was back in the days when output was controlled by a few London publishing houses, and most published poets were educated at Oxford. My contention is supported by three pamphlets I picked up at the Leicester book fair back in March. All three poets are at the beginning of their careers, or at least of their careers as published poets, although I believe that Roy Marshall, the oldest of the three, has been writing poetry for some time, and has recently returned after a long lay-off (usually a good sign).

Of these three, Roy Marshall's poetry is the most conventional; his writing contains emotional responses to observed events, subjective commentary on the external world and employs pathos in description of such things as family bonds and the passage of time, all of which is executed with enviable skill. What marks this poet out from many writing in a similar vein is the knack for highlighting the particulars that capture an emotion or encapsulate a story:

The circuitry of crickets on the air,
his red wine and cigarette breath,
a sickle and scythe laid aside,
and rosemary scent, rising.

The valley draped in wood-smoke webs,
my hair ruffled by his hardened hand...

Close observation, combined with beautifully-judged phrasing. Wayne Burrows, in his foreword, talks of Marshall's '...compression and unforced lyricism..' which is about right, but such attributes don't come without hard work and a long poetic apprenticeship; both of which Marshall evidently put in before bringing out this first slim collection. This pamphlet comes from the excellent series of first collections by Leicester-based Crystal Clear Creators.

Marshall's poems have a theme of family history and reconciliation running through them. I quote the following poem in full to show the skill and economy at work here:

Smaller wars can be fogotten between wars;
afterwards wars, the months and years of enforced peace.

to Korea, in a week, how a lad might replace a sentry
who'd been shot that evening;

how, at nineteen, you might catch shrapnel
in your spine and wheel-chair bound

get home to find your teens at an end
and the swinging sixties just beginning.

Laressa Dickey is American, and writes a poetry which is in a recognizably American style; spare and laconic, with its cadences rooted in everyday speech, not dissimilar to the poetry of Shannon Tharp, whom I recently reviewed. Compared to Marshall, Dickey's verse is more abstract, and its effects are reinforced by its spacing on the page. Phrases are lifted from their surrounding language to float as self-contained linguistic units.

You can go where you are not wanted

The impression I got from this poetry was rootlessness and distance; something reflecting perhaps the vast physical dimensions of the USA. I was confirmed in this feeling by reading the afterword, in which Dickey says:

'In my imagination, since I was a young girl, Amelia Earhart has been crossing the ocean and roaming the skies continuously. The memory of flight, the memory of roaming'.

The poems also touch on the domestic lives of women. Dickey asks 'what is it to be a women living - with what am I to concern myself.'  The poems address this question in snatches of words, like entries in a notebook:

Pretend love is a rocket, small salad greens
I note the seasons

I want to be a beautiful
answerphone

When reading these poems I found myself, rather than reading serially, instead scanning the page, and flicking back and forwards in the book, which seems to be a way to let these pieces of language work their meditative effects:

go farther down to board

That evening I was quiet

I believed a song was boarding

The most linguistically innovative poet of these three is Amy De'Ath. The medieval story of Eric and Enide provides a loose framework around which youthful poems of love and desire are constructed, alongside more literary and intertextual poems. The poetry is clearly influenced by Language poetry, and the notes at the back reference Chretien de Troyes, Emily Dickinson, Virgil and John Clare. The language is woven from statements and phrases which at times appear to make sense, and to relate to the adjacent phrases, but most often veer in unexpected and disorienting directions.In this, De'Ath reminds me of the British poets of the 1940s who are being recovered and used as models by many left-field contemporary poets. Here's a poet writing in 1942:

Should I be here in this rare scaffolding
Clutching the promise of primrose?
You with a yokel handful of blight
Pitching your jacket on gowan,
Conceal the hollow in the core of love
For fear will fast after it move.

How to glide on promise
hunted hunted honed the sky
alone lacking ground a sky
alone on the border of a shadow
of a cloud betrothed and hunted
down.

What's common here is both the lyric impulse, and the denial of a foothold for the reader, thus keeping the attention at surface level, at the level of the language itself. This produces some beautiful effects, and provides an invigorating read; although it's hard on the reader, in comparison with the direct statement and connection with the external world provided by a poet like Roy Marshall.

It should go without saying that I'd recommend anyone to buy and read these three poets.