"The Given" by Robert Sheppard 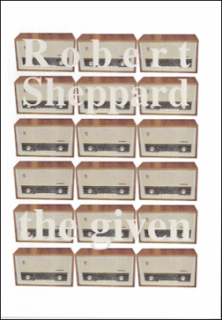 I recently reviewed the "Smartarse" anthology from Knives Forks and Spoons, which I thought was an example of what a good anthology should do, and one of my favourite current pamphlets is this one, "The Given" by Robert Sheppard. Like most KS&F productions, this pamphlet has a workmanlike feel to it, which seems appropriate for the contents, as we get the feeling that Sheppard has moulded his raw materials - the linguistic productions of his earlier life - into a rough-and-ready artefact. The work consists of four prose pieces, totalling forty pages. Section III ends with the following:

"Adrian Clark chalks on the board: 'MATERIALS (the given) + PROCEDURE ="

So 'the given' are the words, the blocks of language taken from old journals and notebooks. The procedure is summarised on the back cover by Scott Thurston:

"Part I attends to what writing has remembered that the writer has not ('I don't remember when I started writing poetry'); part II turns diary entries into questions ('How can he argue that feeling is structural?'); part III revisits the new sentences of Sheppard's 1985 'Letter from Blackstock Road' to process material from that period, whilst part IV alphabetises journal material written only in May, reprising Sheppard's Mayday texts and 'Report on Seaport' in his 'Twentieth Century Blues'".