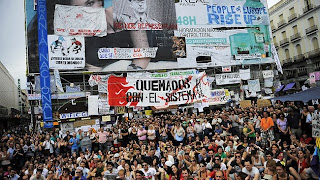 It's my first visit to Madrid, I don't speak Spanish, and I'm only here on a five-day business trip, so I can't claim to be any kind of expert. I'm only reporting what I see. I'd heard vaguely about the Spanish protests, but I was unprepared for the scenes when I emerged from the Puerta del Sol underground and into the square. It's a complete take-over by mainly young people - students I guess - and they're clearly here for a long stay. Tents, sleeping bags, stoves, kitchens and, according to a newspaper report "canteens, daycare, pharmacy, press centre and other facilities...". The picture above gives you an idea of the banners, mainly in Spanish, but I saw several in English with the message - shown in the picture above - saying ""People of Europe, Rise Up". It's quite staggering.

A large area of central Madrid has been taken over, not just the Puerta del Sol. Lots of other smaller squares are full of (mainly young) people who seem to have occupied them on a semi-permanent basis. The gatherings look like sit-ins , reminiscent of the 60s and 70s. And there are smaller gropus every now and then, sometimes gathered round someone making a speech, sometimes in animated conversation. And there are makeshift signs and placards everywhere.

There was a heavy police presence around the government buildings - one was the Finance Ministry, I think - around Puerta del Sol, but in the main the protests seem relatively unpoliced - something inconceivable in London.

On the late train back to Tres Cantos, the town I'm working in, three women in their 50s and 60s and a young woman spotted that we were foreigners - I was with three colleagues, two Dutch, one English - and they moved seats to speak to us about the situation: "What do you think of the protests?" "It's very important what's happening here." The two older women spoke in Spanish and the younger one interpreted. They asked about the student protests in Britain, asking "did the students attain their demands" (to which we had to say, sadly, "not yet"). They were keen to point out that the in Spain "it's not just students, it's everyone".

This is all I know at the moment, but, in the face of an almost total news blackout, I'd thought I'd at least give my limited eye-witness account. These demonstrators clearly see the "austerity measures" being inflicted on Spain as part of the same programme that's inflicting them on Britain, Ireland, Greece and other countries. That's why they're saying "People of Europe, Rise Up".

Thanks so much for reporting on this. It's really important that it gets through to us, even if the media won't do it.

Great post, Alan. I just stuck a link on Twitter, where a handful of people I know are writing about this. Cheers!

I'm passing this on as much as possible. Meanwhile I haven't seen anything about the Greek protests (which model themselves on Madrid) in the British media. However searching for "Syntagma Square" on google news brings up a range of stories including this one: http://www.demotix.com/news/704241/spanish-style-protests-reach-greece-thessaloniki

I wonder if there are similar protests anywhere else. We really do need to disseminate this since conventional news media are keeping it quiet.

this is astonishing alan, and saddening too for the media in the u.s. has not reported on these protests in spain at all. what is reported is how the austerity measures in greece, spain, ireland, portugal, et al effect the markets. tells you what are our priorities, right?

Richard - yes it is astonishing. I didn't think the mainstream media was quite so controlled. Similar protests have also been taking place in Greece and Barcelona (also unreported) and in the latter police used violence to break up a peaceful protest.

It is very illuminating, isn’t it, what the press decides we should see as news. I heard about this from friends in Barcelona and Vic before I read about it in The Guardian. Thanks for the information.