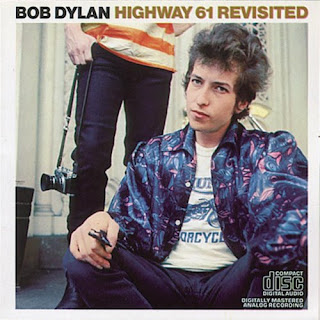 I was driving up the M1 last week, and, for old times' sake, I put on a CD of Bob Dylan's 'Highway 61 Revisited. It's hard not to feel a surge of adrenalin at the crescendos of 'Like a Rolling Stone', especially as I was a fervent Dylan fan in my younger days. The song features a contextless narrator / singer addressing a female subject who seems to have been socially privileged, but who has been brought low and forced into homelessness. The music and lyrics invite the listener to join in the triumphalism of the singer, who revels in the subject's downfall. But as soon as this invitation is mentally declined, you realise how extraordinarily vindictive this song is. It's a sustained attack: 'How does it feel?' .i.e. 'I feel bad; I want to know that you feel bad too, and I think you deserve to'. And the song goes on long enough to make it seem obssessive in its malice.

This judgemental streak seemed to increase in Dylan's work from that period on, and can be found in other songs like 'Positively 4th Street' ('you've got a lot of nerve to say you are my friend'); it also looks forward to the ultimate judgements during his conversion to fire and brimstone Christianity. What's lacking in these songs, and, one could argue, in Dylan's work generally, is self-awareness on the part of the singing persona: the singer is infallible, but the subject is judged and condemned. Nowhere in Dylan's work will you find the painful self-criticism of John Lennon's first two solo albums.

It may be due to this lack of self-knowledge on Dylan's part that I found his autobiography - the loftily-titled 'Chronicles' - impossible to read. Or rather, I read it compulsively, but when I put the book down, I didn't feel like picking it up again (and didn't even finish volume one). 'Chronicles' presents a man who believes in his 'destiny' - a concept I find hard to accept. Dylan even uses at one point the phrase 'my destiny had become manifest'. As an echo of the notorious doctrine of 'Manifest Destiny', which justified the US colonisation of the American West and its brutal campaigns against the Native Americans, this phrase shows remarkable insensitivity and ignorance on the writer's part.
Posted by Alan Baker at 2:57 AM

I loved certain aspects of Dylan from say 64-76, but Kathy and I have always talked about what an asshole he was, how nothing was ever really his fault, how utterly vindictive he was ... one can point to a few songs in which he assumes a bit or responsibility for relationships gone wrong or etc etc but they are pretty counter the trend ...

I haven't really followd his work much since then. Every time I listen to any of "the later Dylan" I feel like I'm watching a fighter who should have quit 3 fights ago ...

Yes, 1964 to 1976 probably covers it. Some truly wonderful work there, that I'll always value. But steep decline afterward. Your fighter analogy is a good one. And aside from Dylan's personality and how it impinges on the work, there's the political stuff - a personal audience with the Pope, praise of the Israeli state, selling a much-loved protest song to a corporation (a bank, I believe).

me, Pauline (Fay), Tony and Sienna and this guy they knew ( Bob's brother it turns out) catches up to us

goes to the saloon with us

I said "who's your brother?"

I was gonna say "Manifest Destiny" murdered our valid Spirituality


this meeting must have been about 1970! Just yeasterday

got to admit i never got into dylan. something rather sancimonious of the old rolling stone covers [the magazine] with dylan captioned with THE POET'S POET rubs me raw.

still, there's a handful of songs that he has that are killers.

i grew up with little richard, little anthony and the imperials, the rightous bros., isaac hayes, ray charles. my old man wasn't into the rock&roll, not until later. oh almost forgot otis redding! that man, otis, was magic.

but no dylan then or now. i'm sure someone will tell me that i missing much, but to be quite blunt i don't miss dylan at all.

I've always thought that 'Like A Rolling Stone' was addressed to himself. It's quite a tender song in many ways. 'You're invisible now, you have no secrets to conceal' sounds like a man who's just taken his first acid trip. 'Positively Fourth St' however - now there's a nasty, vindictive song. I love it.

David et al, it IS possible to enjoy vindictive songs, it's true. And to support your hypothesis David, here's what Clive Allen said:

"I kind of know what you mean about the triumphalism & bitterness in some of the songs – not all of them tho’, by any stretch; think of the truly great love songs, like ‘Love Minus Zero’ , ‘Queen Jane Approximately’, ‘Sad Eyed Lady of the Lowlands’, ‘To Ramona’ (o no! the obsessions taking hold again). But the thing about a song such as ‘Like a Rolling Stone’ is that the person Dylan’s addressing is (& he’s said this in several interviews) HIMSELF. He might’ve thought he was having a go at someone else at the time, but came to realise his rage was directed at his own persona. He’s asking himself how it feels; he’s mocking himself for riding on a chrome horse with his diplomat, he’s asking himself how it felt when he discovered that the diplomat with the Siamese cat on his shoulder on the chrome horse (man, you cd get some really good stuff in those days) wasn’t really where it’s at."

I could never put on Highway 61 'for old times sake' because those times never got old. When I can't think what record to play, or what to take in the car with me, the fall-back position is always 'Highway 61 or Bringing It All Back Home?'
I think Dylan often writes _about_ vindictiveness, the uber-example being not Positively 4th Street but Idiot Wind, but there's only one song I'd categorise as actually being vindictive - that's Ballad in Plain D, and Dylan himself has long since publicly regretted it. You seem, Alan, to make the classic mistake of confusing the narrator with the writer. The first-person in Dylan is almost never Dylan himself.
As for dismissing 'the later Dylan' as a punchdrunk old fighter, oh dear... You could scrape together one pretty decent album from all 10 he made between 1979 and 1992, but Time Out Of Mind (apart from the tedious and unaccountably well regarded Highlands) is very nearly as good as his best early stuff, and better than almost anything anyone else has made over the period. And Tell Tale Signs, although apparently a ragbag assortment of 'rare and unreleased' tracks masquerading as #8 in the 'Official Bootleg' series, is right up there among my all-time favourite albums.
As for the personality impacting on the work - Ezra Pound, anyone?

the last album I got: " LOVE AN THEFT"

from the opening ... Tweedle Dee & Tweedle Dum
to Sugar Baby

OK, let me reassess my position. There's possibly an element of reaction against my youthful obsession going on here. I'd agree Aidan that "Time Out of Mind" is superb. I'd also agree that none of his work sounds dated, so the "old times' sake" was again more to do with me (and aforementioned obssessiveness I consciously tried to move away from). However, if you're going to critique Dylan's work, without a doubt the thing to analyse is the tendency to pass judgement and relative absence of self-analysis or self-blame. I find it hard to accept that "Like a Rolling Stone" is the singer addressing himself. It just doesn't come across that way. The subject is female - significant in view of rock-n-roll gender roles - and "went to the finest schools", and the agressiveness of the refain doesn't feel like self-address. If you have to be aware of Dylan's interview statements about "addressing himself" in the song, then that, indeed, seems to be confusing the work with the person who created it. I was sticking to what's in the song (words and music, as the music is crucial in emphasising the "how does it feel?" aspect).

I think Dylan is one of the greats. His songs have, to coin a cliche, provided the soundtrack to my life. But as an artist and public figure (not his personal life - that's his business) he's not above criticism, and he is, in a number of ways, problematic. The comparison with Pound is spot-on Aidan: I'd never considered that parallel. It's as hard to separate Pound the man from his poetry, as it is to separate Dylan the rock-n-roll hero (or whatever) from his.

see if y'all can get a copy. just his words and his drawings...

this is a Big book by a Big Original

Aidan, Dylan's personae are all too similar in certain regards for me to see them as entirely fictional. And he is self-righteous and "blameless" much more often than not. Which doesn't mean he never wrote beautiful love songs. It just means he's more an asshole than not. Personally, I attribute it to too many amphetamines, to much money, too much adulation. As for Time Out of Mind, well one good round does not redeem an old fighter's career. I've seen old fighters look magnificent every now and then.

But hell, great artists can certainly be assholes, it happens ...

Tho someone (!) said don't look back, I grew up with blues music (e.g Gary Davis, John Hurt, Skip James, Blind Blake ... then Junior Wells, walter Jacobs, Muddy Waters ... before I got into rock. When I first heard Highway 61 I thought: ah, Butterfield's old band ... a few years later, when I first heard Zeppelin, all I could think was what a crude blues band ...