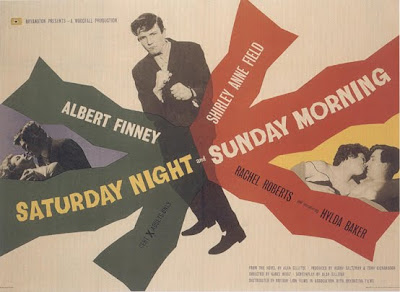 Sillitoes's two great novels, "Saturday Night and Sunday Morning", and "The Loneliness of the Long Distance Runner" were influential for me; the former introduced me to Nottingham in the years before I settled there, and the movie of the latter had a big effect on me as a child. Having left school aged fourteen to work in the Raleigh factory in Nottingham, Sillitoe was able to describe working-class dialogue in a way that was convincing and which didn't patronise his protagonists.

I had the good fortune to meet Alan Sillitoe on several occasions, though I didn't know him well. I think we would have disagreed on a number of subjects has we discussed them but I found him a very nice man and was sorry to hear of his death. He's an under-rated writer these days - there's a tendency to read him as a naively realist writer but he understood his craft and was far more experimental than is ever acknowledged. For all its evocation of Nottingham life, Saturday Night and Sunday Morning is much more than a realist novel. It's also worth looking at Sillitoe's more experimental work, including his poems. Needless to say, the local studies collection at Angel Row is a good resource (so long as they haven't sold it off yet).

I think I would have disagreed with Sillitoe on a number of things too, principally, politics. From what I remember of "Saturday Night and Sunday Morning" long stretches of it were bueatifully-written, lyrical prose, with a slow pace.