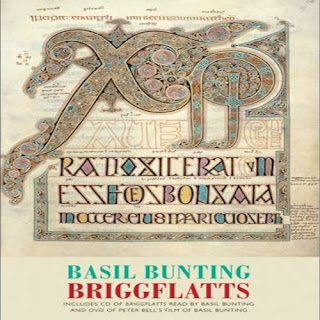 Clive Allen kindly loaned me this, which is I'm pleased about, as I was resisting buying it; it only contains one poem, which, of course, I've already got. The main interest is the CD of Bunting reading 'Briggflatts', and the DVD of Peter Bell's 1982 documentary. This latter is a good, old-fashioned, slow-moving documentary. There's not much information in it, but interviews with the poet, in which he talks a lot of about form and technique, and in which he reads long sections of the poem. There are also some shots of Brigflatts meeting house, and of Bunting attending a quaker meeting there. All good stuff.

It was interesting to hear Bunting saying that, at the age he was (82 at the time) his poetry had been written so long ago, it felt like it had been written by someone else. That's a feeling I certainly identify with (tho I'm not 82), and must be a common one amongst poets. In what sense are poems I wrote ten or more years ago written by the same person as I am now?

Yes, a really good package, for £12. The CD reading pretty much exactly fits my drive to work, so it's been getting a lot of plays.

Hi Matt
I had a version of that reading on a cassette tape, which is now unplayable; I've put this one on my iPod - so it's now entered the 21st century.

Yes, just transferred mine to the iPod.

When I was searching iTunes a while back for some Julian Cope tracks, I came across a free download called Warwick Words, which is readings and interviews with Lee Harwood, David Morley and Anne Stevenson. I've not listened to it all yet, but there's some interesting stuff there.

Sounds good - I'll have a look for that.

I was tempted by this but there's only so much room in a suitcase ...

There's Bunting stuff up at PEnnSound, too ...

Gorgeous cover - right up my alley

I've read Richard Makin's book on Bunting, but not the Terrell. I'd like to see the homage by Ted Enslin.

Tom, yes, the cover. I've seen the real thing at the British Library, but of course, you can only see the page that's open. Apparently you can buy a DVD of the Lindisfarne Gospels, with each page detailed.

this book just in and
a beauty of a
print-job/package by
Bell & Bain Limited, Glasgow.

sure is a treat to hold something produced by a printer OTHER than one of those generic print-on-demand factories..

neat that BB's reading of the poem AND Peter Bell's film included!

gawd.
whoever.
said.
poets.
were.
smart.

Glad you like the book Ed. Yes, it is a nicely made, saddle-stitched book. Lightning Source can't quite do that yet.

'Chump' made me smile, at least.

copy that i just got is perfect bound'

and THAT cover
those 8th century monks sure knew their visuals...

a leap from them to Blake

what are they called? Illuminated manuscripts?

am myself moving back into my own hand as doing
"things"

yet to listen to BB's reading... or the film